This radio broadcast of Otello from Vienna in the last months of the war gives us a rare chance to hear a complete opera with Viennese soprano Hilde Konetzni. Although the war severely restricted her career, she was able to appear in international houses such as Covent Garden both before and after the war. Complete recordings of her are few, but she did appear in the Moralt ring in lighter soprano parts in 1949.
Swedish tenor Torsten Ralf made his career in singing the heavier Wagnerian and Verdi roles. Despite singing in Germany and Austria during the war (unlike some other Swedish singers) he was readily accepted back into the international opera scene, opening the 1945-46 season at the Met for instance as Lohengrin.
Paul Schoffler was one of the greatest German baritones of the 1940s and 1950s. He had an international career even before the war, and was one of the most noted Hans Sachs of his generation, performing and broadcasting the role at Bayreuth, Vienna and New York.
The sound is not bad for a radio broadcast from the 1940s.

This recording is interesting to two reasons. Firstly it is from Rio and not that many opera recordings exist from Rio, but it was a part of the Latin American opera tradition that included the Colon in Buenos Aires and opera houses in Mexico and Uruguay. Secondly it is the earliest live recording (that I know of) of Tebaldi's Tosca. She had recorded the role for Decca in 1952 and would go on to be heard over the radio in live performances in London, New York and elsewhere. Hers is quite a different Floria Tosca to that of her contemporary Callas, but no less worthwhile. She is partnered by Di Stefano, who had been Callas's Cavaradossi for EMI the year before. The sound is not good, there's not much orchestral detail to be heard, but I think the voices come through well enough for those willing to persevere. 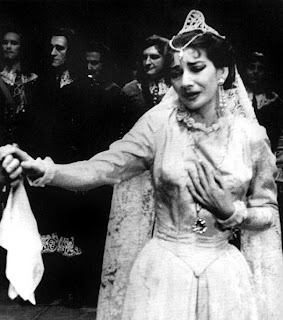 A complete recording of Callas's debut Lucia recorded on June 10, 1952, is available on several different 'pirate' labels, but the Mad scene of two subsequent performances were also recorded and are worth hearing. Callas's voice was as good in these performances as it was ever going to be, and has a security lacking in her 1959 EMI recording. The sound, of course, is far inferior to EMI, but the voice itself is pretty clear. The orchestra and conductor are also inferior to that procured by EMI, and these two extracts are more than a minute different in length which is quite something for a 15 minute extract. 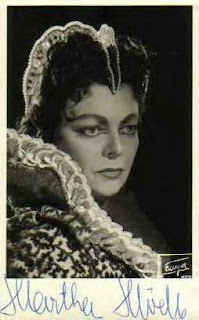 This is another unusual recording to feature Martha Modl, following on from the Edinburgh Rosenkavalier. I am not sure if the great Wagnerian soprano sang this role often, this is the only example I have been able to find. Of course, she was following in the very noble tradition of Kirsten Flagstad who sang this role more than a hundred times between 1951 and 1953, recording it for EMI. The other stand-out name among the cast is a young Herman Prey, a notable Figaro and Pappageno in the 1960s, again singing a role here that otherwise is absent from his discography. The recording is in moderate sound, but a good example of the varied and interesting repertoire to be found in regional opera houses in Germany after the war. 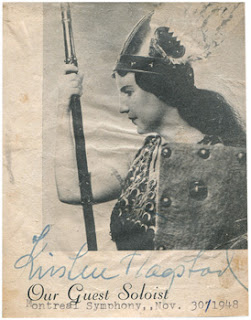 Today is the 50th anniversary of the death of Kirsten Flagstad. To mark her passing I am posting a rare extract of her in the last act of Siegfried. Of all the Ring operas Siegfried was the gives sopranos the least to do, and therefore there are comparatively few recorded examples of Flagstad in the role even though she sang the opera many times. There is a complete recording from January 1937 with Melchior as Siegfried and then some post-war examples from La Scala and Covent Garden. This short extract (44 mins) of act 3 is all that survives from this opera, but whoever recorded it captured all of Flagstad's part. She is partnered by Carl Hartman, a German tenor specialising in Wagnerian roles, who enjoyed success in Europe in particular. He sang at the Met only 16 times between 1937 and 1940.

The sound is rough in places, but more than bearable for the beauty of Flagstad's awakening in the final scene.

The Barber of Seville returned to the Met in 1938 for the first time in 6 years with a new Figaro and new Count. American baritone John Charles Thomas (1891-1960) really made his name on the radio, gaining a wide public following before his Met debut in 1934. He continued to sing on the radio throughout his career and to record a wide range of popular songs. The Met's broadcast audience would hear him three times as this Figaro, twice as Amonasro, and once each as Germont and Valentin.

Bruno Landi (1900-1968) had made his met debut just ten days before this broadcast. His most frequently performed role at the Met was Almaviva, but he also sang the Duke of Mantua, Nemorino and Rodolfo.

The sound is rough in places, but better than other performances from this season.

This recording is of a visit by the Hamburg State Opera to the Edinburgh Festival in 1952. About 37 minutes of extracts are preserved, concentrating on the Octavian of Martha Modl. Modl is best known for her Wagnerian roles, particular Brunnhilde, Kundry and Isolde, which she would sing at Bayreuth and elsewhere during the 1950s. The recent issue by Testament of her stereo Walkure and Gotterdammerung from Bayreuth in 1955 are particularly important documents of her art, while her broadcast of Tristan under Karajan at Bayreuth in 1952 (issued by Orfeo) ranks as one of the finest performances of the opera. Her non-Wagnerian discography is more limited, and examples of her singing Richard Strauss are few. The recording is taken from the complete BBC broadcast, but no further extracts seem to survive. The sound is acceptable.